The craft beer movement revolutionized beer market in the USA. What started as a desire to make and drink better beer instead of bland flavorless mega brews exploded into a movement that is now a worldwide movement. While some countries had interesting beers for its citizens to enjoy, most of us were left searching out those beers in the small imported section in stores. Even most of the imported beer was made by huge breweries in their own countries and imported into the US. It was a step up from most choices we had in the domestic brewing options at least.

On a recent trip to Peru I was able to sample a few of their craft brews that are trying to break into the market. At the Choco Museo, a small space dedicated to everything chocolate. At the Choco Museo you can learn where the cacao comes from as well as buy all types of chocolate products, from chocolate condoms, chocolate tea and of course chocolate bars. They also have beers from the Nuevo Mundo Brewery.

Nuevo Mundo, Panan, Pale Ale is dark golden yellow with an off white head. The nose is fill with malt and hints of lemon. The palate is treated with plenty of malty flavor that is refreshing and enjoyable, but very one-dimensional.

Nuevo Mundo, Pampa Porter, is reddish brown with a dark tan head. The nose is rich and malty with chocolate and vanilla undertones. The palate is filled with toasted malt and a caramel sweetness. Great to enjoy with dark chocolate from the museum.

Nuevo Mundo, Triple Premium packs a punch coming in at 8.5% abv. It is hazy champagne color with an ivory colored head. It has aromas of citrus and red berries. Crisp citrus and orange peel make for a very refreshing tasting palate with a satisfying mouth feel. 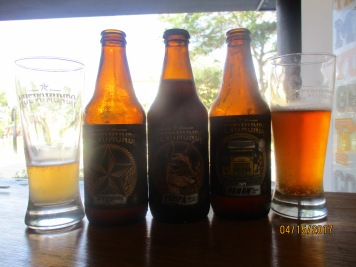 Nuevo Mundo does brew other beers, which I did not taste this time around. They also have two Nuevo Mundo Draft Bars, one in Miraflores and one in Cusco. I didn’t get to visit the Draft Bar this time, but, the next time it is on the top of my list. I hope I get back to Lima soon